What We Are Working On

Each OVT Section Master Plan follows a planning process that combines public engagement with a thorough analysis of the natural and built environments in order to provide the most feasible trail route:

The Overmountain Victory National Historic Trail commemorates the 1780 march of over 2,000 horse-mounted patriots to the Revolutionary War battle at Kings Mountain. The troops marched south in pursuit of Major Patrick Ferguson’s loyalist army. After a total journey of approximately 272 miles through Virginia, Tennessee, and North Carolina, the Overmountain Men defeated the loyalists at the Battle of Kings Mountain in South Carolina.  The patriot victory at Kings Mountain is recognized as a turning point in the war that eventually resulted in American Independence in 1781.

In 1977, North Carolina Congressman James T. Broyhill along with 13 co-sponsoring legislators, introduced a bill to designate the route as a National Historic Trail. Three years later, on September 8, 1980, President Jimmy Carter signed the bill (P.L. 96­344) into law, confirming the designation.

The Overmountain Victory National Historic Trail was the ﬁrst national historic trail to be designated in the eastern United States. In 2015, the OVNHT celebrated its 35th anniversary as one of only 19 national historic trails in the nation. To date, there are approximately 65.5 miles of certified OVNHT open for public enjoyment.

In 2014 the US National Park Service (NPS) began a concentrated effort to develop trail master plans for manageable planning sections along the 272-mile historic route of the Overmountain Victory National Historic Trail (OVNHT). The first seven plans that were completed encompassed planning areas located in North and South Carolina: 1) Lake James to Morganton; 2) Lenoir to Morganton; 3) Elkin to the W. Kerr Scott Reservoir; 4) Chesnee to Kings Mountain National Military Park, 5) Abingdon to Elizabethton; 6) Spruce Pine to Lake James; 7) Rutherfordton to Chesnee. These plans were funded through a cost-share program between the NPS, local governments, and non-profit trail organizations. NPS leadership determined the planning process associated with these plans to be effective.  The NPS is now working to develop master plans for the entire trail corridor. 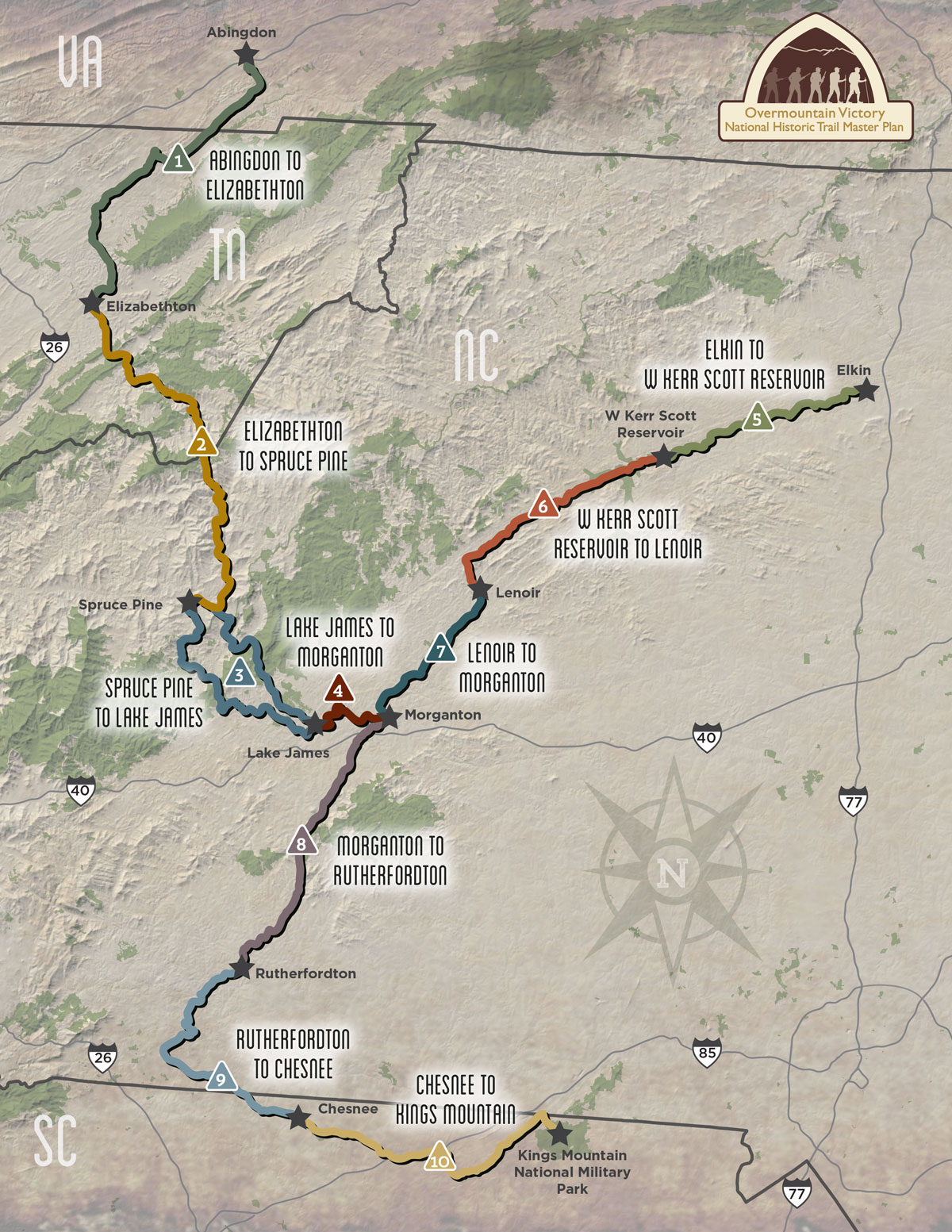